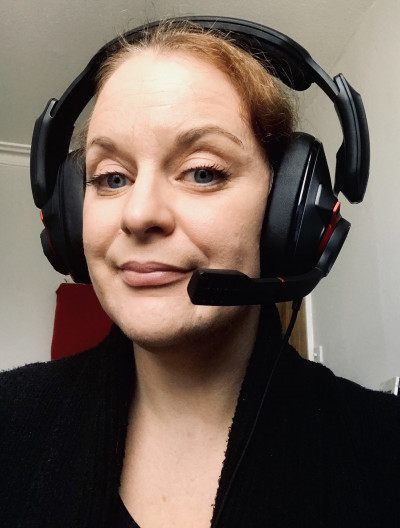 Kirsty Gillmore is an award-winning voice director, casting director, sound designer, voice actor and the owner of Sounds Wilde. Her directing and casting work spans games from AAA to mobile, as well as animation and audio drama. Recent titles include Destruction AllStars (Lucid Games), Baldur’s Gate 3 (Larian Studios), The Magnificent Trufflepigs (Thunkd) and Zombieland: Headshot Fever (XR Games). She has worked in professional sound for over twenty years, sound designing, recording and mixing for theatre, opera and award-winning audio and radio dramas for companies such as B7 Media and Audible. Her recent work includes sound design for the all-star audio drama series Sandman: Act II, based on the acclaimed graphic novels by Neil Gaiman. Kirsty is an in-demand masterclass teacher and speaker, having directed and spoken at Royal Central School of Speech and Drama, Royal Conservatoire of Scotland, Audio Engineering Society, Association of Sound Designers, University of Sussex and University of Edinburgh. She was shortlisted in the Sound category for the Game Dev Heroes awards in 2020, has twice served as a juror for the BAFTA Games Awards and has been a reader for the BAFTA Young Game Designers awards. As a voice actor Kirsty can be heard in commercials, corporate projects, video games, audiobooks and radio dramas worldwide. Her work includes audiobooks for Penguin Random House and HarperCollins, and projects for clients ranging from the World Health Organisation to the BBC. For nine years Kirsty produced and directed award-winning voice demos as Sounds Wilde, specialising in voiceover showreels for gaming and animation. Demos produced by Sounds Wilde have gathered 2 awards and 17 nominations at the One Voice Awards and the SOVAS Voice Arts Awards. In 2019 Sounds Wilde was named Voiceover Services Provider of the Year at the One Voice Awards.

Room 1
Get That Character Demo Working: How to Impress Gaming & Animation Directors and Book More Work
Saturday, 10:40 am